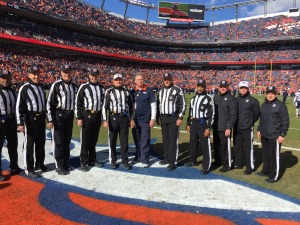 The President/CEO of BridgeWell, Russell D. Dampier, has been working with the National Football Leagues officiating crews for the last 12 years. Above is a picture of Russell along with the officiating crew for the 2016 AFC Championship game held at Sports Authority Field on January 24, 2016. The officiating crew consisted of seven regular officials with three alternates. The head official was none other than Ed Hoculi. The Broncos won the game against the New England Patriots by the score of 20-18 to win a bid to compete for the NFL Championship at the Super Bowl to be held at Levi Stadium in San Francisco on February 7, 2016. Go Broncos.